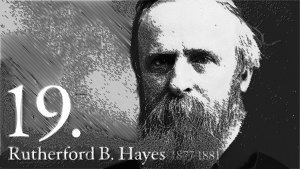 “The strikes have been put down by force,” President Rutherford B. Hayes wrote on August 5, 1877, thinking about the violent uprising that erupted four years after America’s first “Great Depression.”

Leading the nation through the longest economic slump during the first Great Depression in the United States, Hayes questioned how to help America make a peaceful transition from an agricultural age of individual farmers caught without the industrial skills needed for the new and emerging manufacturing age.

“Can’t something be done by education of the strikers, by judicious control of the capitalists, by wise general policy?” 1

The nation’s financial wisdom Hayes questioned came in the wake of displacement caused by the American Civil War. After the war’s end in 1865, the United States attracted capital from domestic and international speculators that accompanied an expansion in credit. But financial distress came eight years later. Railroad investments peaked, leading to an 1873 crisis and financial panic, with the world losing confidence in an American economy and its currency. High unemployment and a depressed economy contributed to growing feelings of human desperation that erupted with violent railroad strikes in July 1877.2

“We were on the verge of a financial crisis that threatened to plunge our economy into a second Great Depression,” Barack Obama said while addressing an education conference and making a false statement to justify why most Americans feel that things are off on the wrong track with his handling of an economy that has already been through two Great Depressions.3

Now that America is in the middle of another monumental transition related to the global job market, from an industrial age of manufacturing workers who emerged out of the first Great Depression’s violence to an information age that demands a supply of knowledge workers, Congress might be more likely to effect safety and happiness with consideration of stimulus similar to that questioned by Hayes but oblivious to Obama.4

6 thoughts on “Hayes of Wisdom”