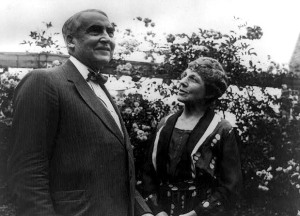 Florence Kling had a music student whose brother was Warren Harding, who was born on November 2, 1865.  The couple met at the piano where Florence taught.  She was determined to nurture a relationship, and he played hard to get.  But they fell in love and married with the “Wedding March” played by a harpist in the new home they had built for their new life with one another.