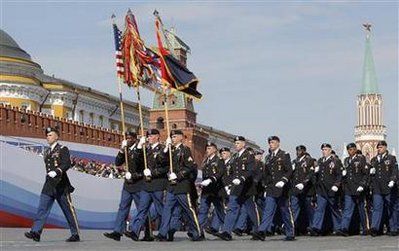 DEFENDING PERESTROIKA: Imagine if Russia joined us to become 51st of the United States of America.

Barack Obama and his aspiring Democratic successors fail to understand the basics of military strategy, of which the highest priority is a prosperous economy for a society to feel the highest allegiance with government, as opposed to the majority of Americans who say the United States is heading down the wrong track.  Describing a treaty with Russia, an American ally with whom he claims relations have been “reset,” Obama said, “There is no higher national security priority for the lame duck session of Congress.”

A priority for national security – higher than our growing alliance with Russia – must be the immediate inspection and verification of the nuclear program being developed by the dictatorship in Iran, with links to networks of Islamic jihadist terrorists attacking American and Russian cities alike.

Writing as a student at Harvard, an aspiring president described disadvantages analogous to those currently faced by Russia and the United States, through events that led to the Great Patriotic War.

Instead of allowing themselves to be distracted by ratification of Obama’s lame duck ignorance, the United States Senate should judge it as necessary and expedient to focus on America’s highest priority for a sensible strategy to stop the proliferation of nuclear weapons.

Barack Obama, “Remarks by the President at a Meeting on the New START Treaty,” The White House, November 18, 2010.